The pasta is bucatini; and I don’t think I will ever eat another kind again. 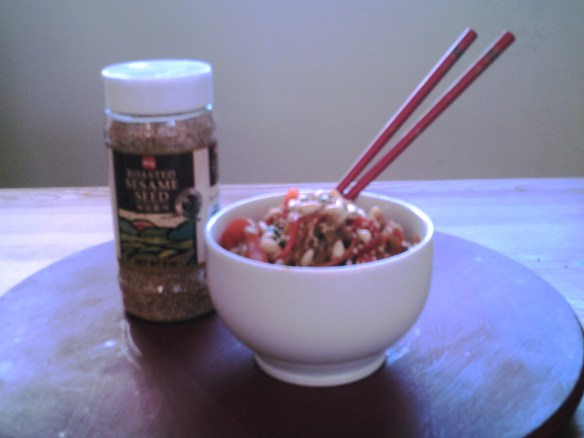 Okay, so it’s just chop suey.  I just figured out how to make chop suey.  Whoop-dee-doo!  But I figured it out on my own without looking it up.  That’s how much of a genius I am; I create age old dishes completely on my own.

It actually bummed me out when I went online and did less than five minutes of research with google and discovered that what I thought would usher in a new era for veggie-only and gluten-intolerant folks (Vegetable Pasta!  Pasta, made out of vegetables!  I am a pioneer, a goddamn innovator, a fucking trailblazer!) was actually invented in the 1800’s.  I feel like a grandparent who calls up his grandson to ask, “Hey Billy, have you heard about this MySpace thing?”

Still, I’m going to put the recipe down as I don’t have anything else right now and I took all these damn pictures (still have a shitty camera though, sorry).  Plus, the possibilities for this dish are somewhat insurmountable so it might be good to know anyway. 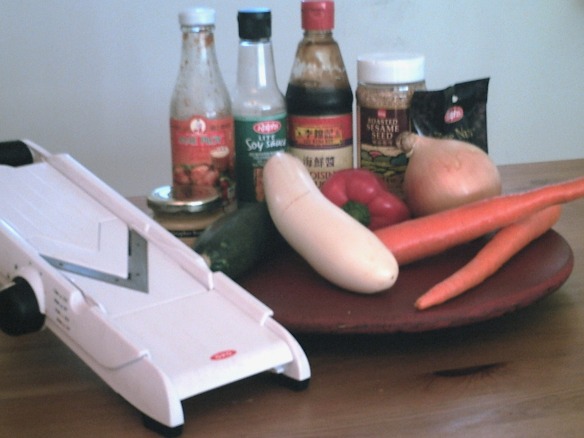 – Zucchini (also called Italian Squash, apparently)
– Carrot (also called the Orange Killer of the North)
– Red Pepper (also called Dave)
– Onion (also called Onion)
– Eggplant (I normally try to go for a Chinese or Japanese Eggplant for this, but they didn’t have any good ones at my local foodmart so I had to go with the White Eggplant which just looks like a very large bean to me.)

You can use any vegetables that you want, but long thin ones work best if you want that pasta effect.  Also shy away from the starchier stuff as it would take a lot longer to cook than the other stuff.

That’s it, basically.  How you cook it is up to you and up to the style you want.  Stir-frying with some garlic and ginger will give you the Asian flair.  If you want a more Italian theme, fry the onions and red pepper with some garlic, boil the carrots, leave the squash and eggplant alone (they don’t need to cook just to be heated, which a sauce can do) and pour over some tomato sauce and cheese.  You could even leave everything raw, throw in some olives and asparagus, drizzle on a vinaigrette and have a salad you can twirl onto a fork.  And if you don’t feel like being vegan-friendly or gluten-free, throw some shrimp in that stir-fry!  Put sausage in the tomato sauce, and use actual pasta too.  Cut up some barbequed chicken into that salad.

As for me, I did a stir-fry this time with my own sauce.

Then you put it into a bowl, dash on some sesame seeds and throw in some pine nuts.  I also ate it with some broiled white fish.  It may not be innovative, but it sure is tasty.