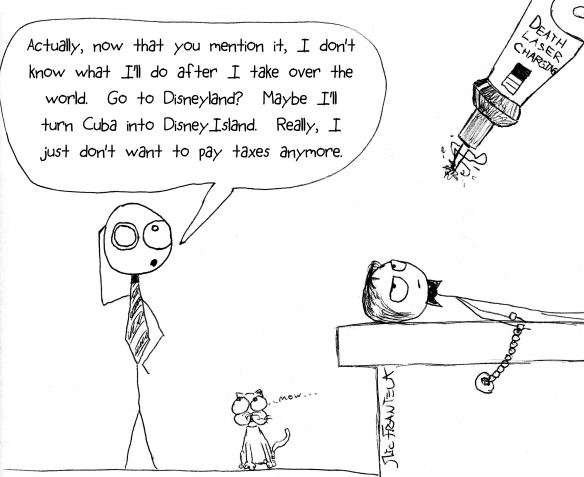 Phil and his wife are asleep in bed.  The clock on the nightstand reads 3:47am.  Suddenly, Rosco, wearing Mickey Mouse mask, ears and gloves and wielding a gun, kicks open the door and start firing his gun into the ceiling.  Phil and his wife wake up with a start.  Phil’s wife sees the masked man with the gun and starts to scream.

ROSCO:  (in a scary voice) The time has come for us to leave –

Rosco walks closer to the bed.  Phil’s wife, completely hysterical, runs for the open door.  Rosco whips out a giant hose that is attached to his belt and going out into the hallway.  He points it at her, opens the nozzle, and a giant stream of water bursts out at Phil’s wife, who gets knocked back against the edge of the bed.  Rosco turns off the hose and begins to laugh.

PHIL:  WHAT THE FUCK ARE YOU DOING?!

ROSCO:  I can’t remember the words to “The Pirates of the Caribbean” song, so fuck work!  Let’s go to Disneyland!

Rosco shoots the gun into the ceiling again.

Rosco looks at the gun for a moment.

ROSCO:  I’m not sure if I’m going to be able to answer that question to any sort of satisfaction.

Phil sits up in bed, trying to comprehend.

PHIL:  I’m not going to Disneyland.  Why don’t you just look it up?

ROSCO:  My internet went down a few hours ago.  It might be back up by now, but once I got the hose hooked up I decided just to run with it.

PHIL:  “Because if something is worth doing”, right?

PHIL:  How do you shoot that gun while wearing those big gloves?

ROSCO:  With lots and lots of practice.

Phil’s wife, having come to over the conversation, sees Rosco standing over her and starts screaming once more.  Rosco blasts her with the water again.

* Dedicated to Time for More Cake, who went through almost this exact same thing with his father when he was young.  Minus the wife, gun and water hose.And the song + lyrics can be found here.