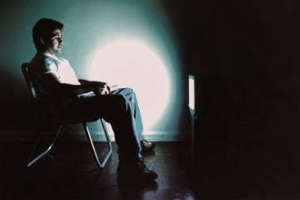 Drake sat in front of his small television in his shack of an apartment and ripped open the package.  Inside was a folder full of reports, documents and photographs, and a VHS tape.  Aw hell, Drake thought.  He tossed the folder onto the side table and went to the closet to get his VCR.

He hooked the machine up to the television and sat back into his chair.  He pushed the tape in, pressed play and picked up the folder.  Nothing showed on the screen but static so Drake read the report by the light from the television screen.

—Little is known about Yvanlovich’s background; preliminary investigators researching.  The earliest intel is when he began employment under General Igan Runuisticev, a Russian military advisor, in 1979. — Runuisticev, whose mental illness and addiction to psychostimulants led to his “revolution’s” eventual downfall, hired the young doctor to create a narcotic that would increase synaptic responses while simultaneously decreasing activity in the amygdala so his soldiers would not experience fear.  Yvanlovich went one step further and created a drug that also increased the amount of testosterone the body produced, as well as causing hypoalgesia (decreased sensitivity to pain.) — This effect was only temporary, however, and required that a user take increasingly large doses to gain full effect.  It was found that subjects who had a small dose of the drug developed a hypersensitivity to painful stimuli.  This was also the case with subjects that stopped taking the serum, although most died from cardiac arrest through overdose.  Side note: The serum slows body decomposition dramatically as many of the dead soldiers of the revolution seemed that they had only just died two weeks after death. — While the General’s revolution failed, the government was impressed with Yvanlovich’s narcotic and he began to work for them.  His experiments to increase the effectiveness of his serum led Yvanlovich to become less concerned with his test subjects, and over time his experiments became sadistic in nature.  With the recent fall of his government, Yvanlovich has been on the run leaving a trail of drug deals with violent terrorist groups and failed experiments all across the globe.

Drake pulled out a photograph showing a tall man walking down a street wearing sharply ironed pants and a white dress shirt.

Recent intelligence suggests he is currently located in South America.  Your mission is to find Yvanlovich, apprehend him and collect any data regarding his serum.  Use of deadly force is authorized.  Your usual contact for that region is awaiting your arrival.

The VCR made a whirring sound followed by crackles.  Drake smacked the top of the machine.  The crackles stopped but the whirring continued and the video began to play.  On the screen, the words “EXPERIMENT 243-F-02” appeared.  Then Yvanlovich emerged on the screen.  He was in surgical scrubs and had rubber gloves on his hands.

“It’s October 19, 2008” Yvanlovich said, “and this is the continuing experiments with the Cardiac Control Implant Module, or CCI module, and its interaction with the latest sample of the UR-33 serum.”

He walked off camera, revealing an unconscious man strapped to an operating table.  The head of table had been raised so the man was tilted towards the camera.  He was a scrawny man and his rib cage was clearly visible even with the poor quality of the video.  A large square cut had been made on the man’s left pectoral muscle.  Yvanlovich walked back into view, standing behind the table.  As he got into frame, he pulled a small cart with surgical tools on it to his side.

“Because previous experiments with electricity and the pure UR-32 serum demonstrated explosive results, I’ve created the UR-33 strain to be able to withstand such discharges.  Still, I am only giving the subject a minimal dose, just to be cautious.”  Yvanlovich picked up a syringe from the instrument tray and injected his subject with it.  The man gasped loudly and quickly began to fight against the straps holding him down.

“As you can see” Yvanlovich said as he tightened the straps around the man’s torso, “the subject portrays the usual effects; heightened aggression, increased strength and a resistance to heavy tranquilizers.  Also, take note how these effects were displayed immediately, and with just ten percent the normal dose.”  Drake noticed that the subject’s veins, which were already visible on the thin man’s body, were much larger.  Drake could see them pulsate as they pumped blood and serum through his body.

“Of course some of the effects are not present with a small dosage.  The most notable are the desensitized nerves.”  Yvanlovich made a small cut with a scalpel on the man’s arm and he reacted with such intense pain that Drake jumped back in his chair.  The man screamed in long, loud yells, and tears streamed down his face.  Drake looked at the report again and honed in on the line, “It was found that subjects who had a small dose of the drug developed a hypersensitivity to painful stimuli.”  The screams became muffled and Drake looked back at the screen to see that the doctor had gagged his patient.  The man was still screaming.

“The negative effects of the serum raise a concern.  The human body can not handle the serum for longer than two weeks before organ failure.  However, for the serum to take full effect, it needs to be in the body for at least ten days, leaving a window of four days for optimal efficiency.  That is why I have designed the CCI module.  When implanted, it sends an electrical charge that stops the heart while at the same time slowly administering the UR-33 serum.  Then, when the client so desires, the CCI module will send another electrical charge, starting the heart.  This allows the client to utilize the optimal time frame of the serum.  Because of UR-33’s benefits, host bodies will maintain vitality for up to three weeks.”

Yvanlovich then slowly leaned over the man, made a slight incision on the cut on the man’s chest, and lifted off the flap of skin.  The breastbone had already been cut, and the man’s pumping heart was entirely exposed.  Yvanlovich tossed the skin into a sink.  Then he reached onto his tray, picked up a small device that looked like a small receptionist’s headset with a vial of liquid attached to it, and carefully placed it on the man’s heart.

“Now all one needs to do is send a signal from this small transmitter” he held up a small device that had a large button on it, “and the module will function.”  Yvanlovich pressed the button.  A small spark emanated from the device and the pumping heart stopped.  The man, who had continued screaming while the doctor operated on his chest, fell silent and limp.  “Transmit again and the body reanimates.”  He pressed the button again.  Another spark flew from the man’s chest, and he began to scream again with even more fervor.  “This is, of course, a prototype.  The final model will not create such visible sparks.”

Despite the gag in his mouth the man’s screaming only grew louder.  Drake flinched as his ears began to ring.

“The serum will continue to flow because of the implant, helping to deliver oxygen to the brain.  While some slight brain damage does occur, higher motor functions and basic reasoning are not affected.  What is amazing is that the subject doesn’t experience a loss of time.  From their point of view, the moment that the heart stops to the moment they are revived is seamless.  As I will demonstrate.”

Yvanlovich leaned over the man and spoke what sounded like Spanish.  The man stopped screaming, although he was whimpering, and listened.  Yvanlovich stopped speaking, took out the gag and pointed to the camera.  The man looked at it, hesitated, and then began to speak.  Drake had always been bad with languages, but he knew enough rudimentary Spanish to make out what the man was saying.  He was reciting the alphabet.

“Now notice what happens.”  Yvanlovich hit the button, and the subject stopped.  Things sat in silence as his body went limp and smoke gently rose up from the cavity in the man’s chest.  Then after what the timecode on the bottom of the screen said as twenty seconds, the doctor hit the button.  The man yelped and then went right back into saying the ABC’s exactly where he left off.  “Absolutely no indication that the subject senses a passing of time.  The applications of this feature are numerous.  And this process is repeatable.”  He hit the button again, and the man stopped speaking.  After a slight pause, he brought the man back.  Yvanlovich did it again.  And again.  And again.  Each time he came back, the man gave a howl before he started reciting where he left off.  The words “hypersensitivity to painful stimuli” buzzed through Drake’s head.

It was getting harder to watch the video.  The doctor continued to kill and restore his patient, but was no longer making any observations.  He just stood by the table looking down at the man with a childish glee on his face.  As the man on the table grew closer to the end, the pauses between each jolt lessened.  Soon Yvanlovich was tapping the button at a quick tempo.

The man finished, and Drake let out a breath he hadn’t realized he was holding.  It’s done, thank Christ.  But then the doctor leaned over the man and whispered, “Una vez más.”  The man began the alphabet once more, and Yvanlovich continued with his “experiment”.

Yvanlovich rapidly hit the button over and over.  The sparks flying from the man’s chest had become one long, non-ending stream of light.  The man had ceased reciting the alphabet and had started screaming again, but the scream was constantly stopping as the man died as if he were a broken speaker going in and out.

Drake had to turn away when the sparks ignited the man’s skin and he caught on fire.  Drake hit the stop button but the old VCR just whirred louder and continued to play.  Drake punched the stop button again, and then the eject button, but the tape still played on.  He tried smacking it but nothing happened.  Then he picked the VCR up, yanked the cords out of the television, and threw it across the room.  It broke in pieces and left a hole in the wall.

The static had returned to the television and glowed in the dark room.  Drake sat back in his chair.  He sat in silence, but he could still hear the man recite the alphabet over and over again.