I was helping to hide Easter eggs for my nieces and nephews (technically they are my second cousins, but everyone in the family gets really confused with the different ranks of cousins, so I’m an uncle) when I remembered a little bunny that briefly lived in my apartment a year or two ago.

My roommate, despite it being stated in the lease that we were not allowed pets, had bought a bunny from some street corner in the fashion district of Los Angeles.  It was white and light gray and could fit in the palm of your hand.  Very cute and very tiny, Rosie (which is what my roommate named the bunny) grew on the entire apartment.

For about three weeks during the beginning of summer, all of my roommates were away and I was left with taking care of the bunny.  Feeling wrong to keep it locked up in a cage in a hot apartment all day, I would let her roam free to find a nice cool shady spot under the couch.  This worked fine, except I started to find piles of her droppings in every nook and cranny of the house.  Small, dark and hard, they were easily swept up or vacuumed.

What surprised me was that the piles of tiny pellets were so large.  How could such a tiny creature create so much waste?  It was barely big enough to finish a sprig of lettuce, but by the looks of her droppings you could have sworn she had the “Moon Over My Hammy” special at Denny’s, with extra bacon on the side.

This image suddenly popped into my head as I was hiding some chocolate eggs in the bushes next to my grandparents’ house, where we were all gathering for an Easter lunch.  No matter how hard I tried, I could not get the idea that these chocolate eggs were really just the droppings of the Easter Bunny, who purposefully does his “business” with delicious results in the bushes so no one would find it.

My gift for Easter this year was that I would never be able to look at a chocolate Easter egg without thinking that a large bunny had just defecated on my property. 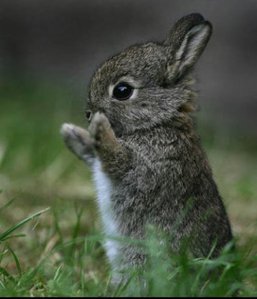 1 thought on “And Now You Always Will, Too”