Gunfire.  Why does everything in my life involve gunfire?  He was running down the corridor, hoping the exit would soon make itself apparent.  Wouldn’t be so bad if it wasn’t always coming in my direction.  The gunfire had died down, allowing him to hear the shouts of the muscle chasing him.  Maybe they will take a wrong turn.

God, he hated Cairo.  Everything smelled.  And although the pyramids were so big, their interiors were damn claustrophobic.  This corridor had started getting smaller when he had really broke out running, the walls moving in as he sped his way through the pyramid, or temple, or whatever the hell it was; they were all the same to him.  The whole business had become tedious.  When he started, it had been like Indiana Jones; do some research, fly to exotic locations, explore vast jungles, shoot dangerous animals, find ancient ruins, bust into rooms, shoot some people, retrieve artifacts, a little more shooting even if everyone was dead, and then skedaddle where he would promptly collect his money.  Maybe if he found himself in a corner, probably the way this would end up, he would be able to show his true talents, which was spinning a pocket watch atop a magnifying glass.

These days everything was morose and shooting things did not have the same ageless charm it first held.  Milton, which is what he named is revolver, adored its use when the occasion was fun and exciting, but detested the grave and serious.  Friends had slimmed out (either too old or too dead) and enemies had become all about the pay off instead of the loftier ideas of conquest and world domination.  No one ever thought about the foreplay anymore, and so the whole business had changed.  Nowadays, the artifacts were more obscure, harder to reach (he had to practically plunge into a volcano for one just a few months ago and he had nearly lost his hat) and were far less profitable.  He still pulled in a decent income but it wouldn’t last, and the thought of going back to investigating petty divorces and lost cats scared him to death.

But this was exciting.  Intrigue practically made this little object glow like an ember in the wind, starting to burn his hand.  In fact, it worried him.  For months events had been dull, and then this thing just popped up out of nowhere?  He had almost missed it trying to get to the mummified remains of the only midget Indian raja that had been mistaken for a monkey corpse, which was what he was actually hired to retrieve when he saw it.

A perfectly round orb, as large as a grapefruit, made of black stone that had been etched with markings he had never seen before.  Some gold leafing and what looked like diamonds cut into very strange symbols were inlaid on the top and bottom.   It weighed almost nothing.  By looking at it he had guessed it must weigh at least, well, at least as much as a grapefruit.  It should be as heavy as a large stone.  But this was as light as air, as if it was hollow.  It was very old, older than the temple he was in, but it was a very advanced piece of work.  He was not even sure they would be able to make the likes of this nowadays, and his world had invented things like deep space telescopes and electric pepper grinders.  No, there was something special about this thing, but the way it was just sitting there made him worry.  Is it possible for someone to just misplace this wondrous item right by the rotten raja carcass?  Sure, happens all the time in third world countries.  In any case, that was something for “The Savior” to deduce, which would only happen if he could get out of this country, which would only happen if he got out of this alive.

He stopped running.  The corridor had opened into a chamber that split into three hallways.  He knew the right one would just circle back around to the main chamber, which was where he was running from, so either the left or the middle would lead him to an exit.  The other would probably lead to his death.  He was terrible at decisions like this, he couldn’t even choose which candy bar he wanted when he went to the grocery store.  He stood there, looking back and forth, waiting for some inspiration to guide him, which came in the form of eight men firing very big guns.  He decided to take his chances and go left.

The hallway had gone up some stairs (which he thought was a good sign), down some stairs (which he knew was not a good sign), twisted a bit and opened up into a room with a window about six inches in diameter, placed twelve feet above the floor.  Great, he thought, all I need is a ladder and maybe I could fit my hand through.  Who would put such a small window there?

He slid the black ball into his coat pocket, and pulled out his pocket watch.  How long had he been running since he had taken the left hall?  It couldn’t have been more than twenty seconds.  Oh well, have to stall for at least thirty.  Too soon and he would probably end up in the small chamber where his pursuers found him, just after he remembered about the mummified raja and went back so he could get his salary, and that would be dangerous and awkward.  Too late, and he would be too far past the chamber where the corridor split, and end up right back here.  Thirty was a good bet, and then he would retrace his steps and get the hell out of there.

“Put your hands up!”  He started to lift his hands over his head when a bullet whizzed past his head.  It left a hole in the wall about 6 inches in diameter.  That explains the window.  “Don’t move!”

“I think you got the order of that sequence mixed up.”  Another bullet flew through the air and made another window.  “My mistake.”

“Just give it back to us Daraven and no one has to get hurt.”

“I doubt I would come out unscathed.  Seems you guys want to empty out those guns, reload, and unload again.”

“We don’t have to make it painful.”

“But you really want to, right?”

“Just give us the damn thing!”

He held up the raja, and it exploded in his hands as it was shot by eight separate bullets.  Fan-fucking-tastic.  He glanced at his pocket watch in his left hand.  Almost there.  He started to extend his left arm so it was pointing straight out.

“I think I would rather keep it.”

“Then we’ll just have to kill you!”

The sound of eight guns cocked in unison is a little comforting, he thought.  “And risk hitting this little orb with those anti-aircraft guns of yours?  I think not.”

. . . 24, 25 . . .  The move has to be quick and smooth.  His left hand twisted moving the watch into correct position.  His other hand fingered a small tab in his right sleeve that when pulled would pop Milton out of his holster and into the air.  It felt good doing the old tricks again.

“No I think I’ll keep this thing right here in my pocket.”

“You have no idea what you are messing with!  You’re getting involved with things you don’t have the power to handle!”

“I’m just going to have to learn that the old fashioned way.”  He locked his left arm and heard that satisfying click and then he spun to the right and pulled the tab.  Milton flew up into the air and he caught it with a trained hand.  He pointed it straight at the ring leader and fired a shot into his head.  And while the bastard’s brain was doing some relocation to the floor, he let the long magnifying glass fall out of his left coat sleeve and catch the chain of the pocket watch on its tip.  And just as the other guards started to let loose their gun fire, Draven Daraven spun the pocket watch with his magnifying glass in front of him.  The bullets hit the spinning watch chain and bounced back in the opposite direction, sending the guards to the floor.  Then Draven ran forward as a bright blue light engulfed him till he could not see anything anymore.

A wind rush passed him, and he heard the short conversation he had just had, except backwards, as if it was a tape playing in reverse.  And suddenly the light died down, and he was back in the corridor, running.  He was no longer holding Milton or his magnifying glass, just the orb.  He patted his other pocket and felt the raja.  Fan-fucking-tastic!

Gunfire.  “He went down that way!”  He sped up, not focusing on the orb this time.  When he reached the chamber of hallways, he went straight and ran into the darkness.  He was making good time.  He glanced at the orb briefly before putting it into his pocket again.  He would make it out, go visit his client and give the raja over, collect his substantial fee, and then he would go to Venice Beach and talk to the Savior.  Everything was going to be fine.

But how long would that last? he thought.  Not long.  The ring leader was right.   Daraven had no idea what he was dealing with.  But he had a hunch the Savior wouldn’t know what it was either, and that was a scary thought.  There was something different about all of this, something he didn’t like.  He didn’t want to say it felt like being a pawn in a chess game; that all the pieces had been placed and this was the first move.  He didn’t want to say this felt like the beginning of the end somehow, but it did.  This was something big and scary.  His instincts were never the best ones in the bunch, so he decided not to listen to them right now.  One thing was for certain though, things were going to change. 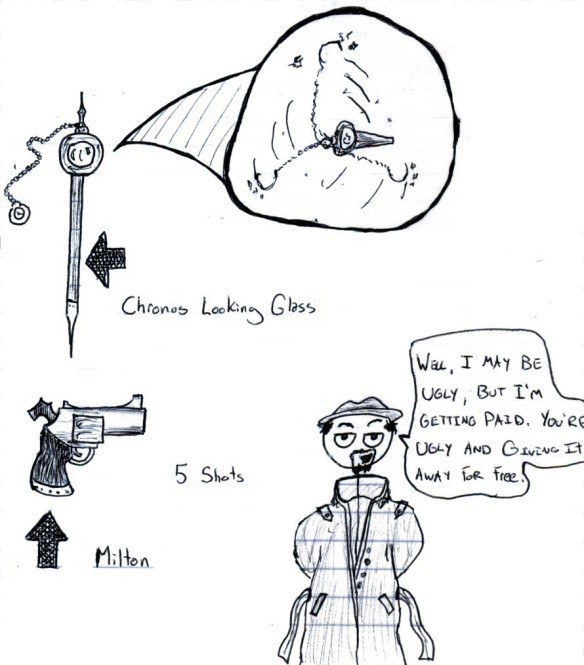