Geez, what a shitty title.

All of these posts on diet and exercise are serving a two-fold purpose:

1.  You, faithful and most beautiful and most extravagantly genius reader, get to have some insight on weight-loss and diet, and perhaps learn to step around common pitfalls every valiant pursuer of a healthier/thinner body tends to fall in a few times.

2.  I get to review all of these topics as I write them and perhaps find what I have been doing wrong or what I have forgotten.

I am more than happy to share my “knowledge” with all of you, but you have to understand how much that second point pisses me off.  I hate learning things, let alone RElearning things, as I find it akin to back-tracking, and fuck that shit.  Unless you’re trying to lose some pirates by walking into a cave and then going back by stepping into the footprints you have already made in the sand as a form of misdirection, back-tracking is simply infuriating.

This has nothing to do with the today’s topic; I just wanted to let you know if my tone sounds a little angrier than usual, that is the reason.

"I hate getting smarter!"

As you had to do with food, you’re going to have to learn some vocabulary and classifications before you start putting together an exercise plan.  Most of these will be words you are already familiar with (muscle, aerobic, pulse) but we’re going to have to make the definitions a bit more clear cut if you are going to start exercising properly.  Now you may say, “Running is running, and I hate running.  I don’t need any other definitions other than knowing running is something I hate.”  But remember that one of your biggest weapons in the battle of the bulge is knowledge and understanding and loose terms never helped anyone.  Also, after some research you will realize that running may not be the best form of exercise for you (in most cases is actually to be avoided, depending on your size) and that there are many ways to get your heart pumping.

Also, watch that mouth.  I’m smart-ass enough for all of us.

Almost all modes of exercise fall within three categories (flexibility, aerobic and anaerobic, which I’ll talk about in later posts) and each are important to your overall health and strength.  Notice how I didn’t say “important to weight loss”?  That’s not because you shouldn’t focus on working out (which, if true, would make this one of the shortest and dumbest posts I’ve written), but because you need to change your ideas about exercise.  It’s not just for the person who wants to lose weight, or for the training athlete, or for crazy people who like to do these kinds of things for the hell of it.  Exercise is something for everyone and should be done by everybody.  And it’s a lot easier to do than you might think. 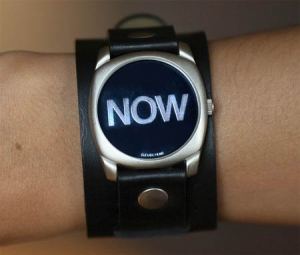 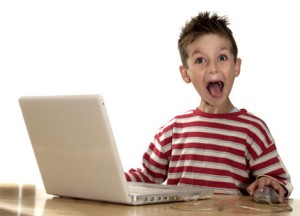 "You mean we can be interactive on the internet? AMAZING!"

Do me a favor and go lie down on your bed.  For those of you who aren’t near your bed, wait until you get home.  If you have to do something like walk upstairs or fight with the lion that you keep in your hallway, lay down for a good ten minutes and relax before starting.  If you’re already in bed while you are reading this, what, you don’t have a desk?

These can double as a desk, and people are practically GIVING them away.

Now as you’re laying down, all calm and collected, go ahead and take your pulse:  Two fingers to either side of your jugular, count the number of times your heart beats for ten seconds, and then multiply by six.  Don’t press too hard as you may feel the pulse of your finger tips and end up miscalculating.  If you can’t find your pulse, then I’m sorry but –

This is your Resting Heart Rate, the speed at which your heart beats while doing nothing extraneous or exciting whatsoever.  The Mayo Clinic lists the average resting heart rate to be anywhere between 60 and 100 beats per minute (bpm), which is a really large gap for something as renowned and official as the Mayo Clinic in my opinion.  But every single body can be drastically different in this regard, depending on how much you work your body during a normal day, what sex you are, your age, blah blah blah.  In general, 80-90 bpm is what the normal heart beats at.

Now seeing as laying down isn’t exercise no matter how many birthday wishes I waste trying to change it, we are going to have to calculate another number.

220 bpm is the highest an average heart can beat before it simply explodes like C4 and burns with the heat and fury of hell.  No, I’m not trying to get you to exercise until your heart bursts from your chest – 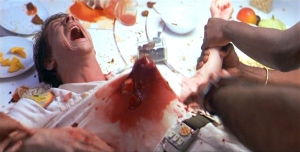 – but if you take this number and subtract your age from it, you will get a general idea of what your optimum heart rate is.  Your Optimum Heart Rate (otherwise known by its much more awesome name, VO2 Max) is the speed at which your heart beats when you are exerting all of your effort into moving your body.  Think of it as the rate at which your heart beats when you are running for your life.  From a bear, perhaps, or maybe from that lion you keep in your hallway.  It’s the heart rate you achieve when your “Fight or Flight” instinct kicks in and your system is flooded with enough adrenaline to run up a tree or brain-punch a gigantic cat.

This is not the heart rate you should be aiming for when exercising either, but with it we can make some more computations to help figure out where you should be.  Now to spare you having to plug through equations and shit, such as:

I’ll just go ahead and throw up a chart that explains it without all that pesky mathematic mumbo-jumbo.

You . . . you all know how to read a graph, right? If I need to explain this to you then you should just go back to school. They have PE in school.

Hmmm.  I’m starting to realize I could have just posted this chart and skipped all the writing I’ve just done.  Man, even being lazy takes a lot of work.

Remember that Resting Heart Rate I had you find out earlier?  If your bpm is between that and the first row of numbers on the bottom of that chart, you aren’t doing anything.  You’re not getting exercise, you’re not working out, you’re not losing weight.  If you’re heart rate is not in the light yellow area (aka – the Moderate Activity Zone, aka – Spinning in Your Chair Really Fast For At Least Ten Minutes Zone) you’re doing nothing for yourself.

However, once your heart rate is in the SIYCRFFALTM Zone, you’re exercising!  Anything between taking a five minute walk and running a five hour marathon is considered exercise.  By taking this view of it, suddenly being more active doesn’t seem so terrifying.  You don’t need to go to a gym, to don’t need to wear sweat pants.  Other people don’t even have to realize that you are doing it!  And it includes fun stuff too, not just running and lifting weights.  Jumping on a trampoline is exercise!  Chopping down a tree is exercise!  Chasing after the birds in the park is exercise!  Sex is exercise!  Hell, even masturbation is exercise!  Anything, anything, that gets your heart beat up into that light yellow zone and keeps it there for a prolonged period of time is exercise.

Of course, exercising doesn’t necessarily mean losing weight, which is why we are all here.  But you have to start somewhere and you can’t just jump off by trying to run five miles everyday.  If you have been large for a long time and you trying to sprint for as long as you can you’re going to end up hurting yourself.  Your bones and muscles and heart simply aren’t prepared for the stress, and you’re dooming yourself for failure and the depression that comes with it if you attempt exercise so haphazardly.

It’s infuriating having to take it slow, I know.  It drives me bonkers when I’m not able to do something physical because I know I’m not strong enough yet.  To hold yourself back when all you want to do is get rid of the shame you feel about yourself, or to feel healthier day by day, is frustrating to the point of tears.  And I’m sorry, I really am, but you can’t force this.  It is too easy to injure yourself, to permanently damage your body with improper exercise.  If you work hard and keep at it, the time will come when you will be able to do things with your body that you never even dreamed of, but you’re going to have to start off with baby steps.

In the meantime, start going for walks, even if it’s for ten minutes.  Go into your backyard and kick a soccer ball against the side of the house.  Dust off those rollerblades and go skating in the park.  Sure, you’ll be dating yourself by at least a decade or so, but you’ll also be working up a sweat and if it’s a clear day and there’s a slight breeze, you won’t even know it is happening.

P.S. – You really should do something about that lion in your hallway. 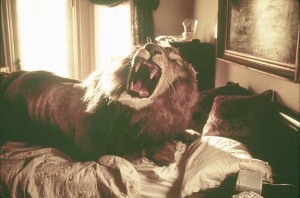 Honestly, why did you even buy the god damn thing?