Meat is important.  I’m not just saying that because I like (love) meat, but because it is a vital component to weight loss.  Now now, I hear all you vegetarians starting to hem and haw already, but odds are that if you’re a vegetarian you probably don’t have to worry about weight, unless you’re the vegetarian who can eat eggs, butter, cheese, fish (sometimes), chicken (when no one is looking), and pays no attention if it’s olive oil or lard that those onion rings were fried in.  In that case, I have to ask, “Who are you kidding?  Man the fuck and eat the goddamn bacon!”

Will cutting meat out of your diet help you lose weight?  Yes.  Sorry, no doubt about it, it will.  But you have to understand that you will have to work twice as hard and consume (and buy) almost twice the amount of meat-substitutes to get all the protein your body is going to need once you get into the heavy stages of weight-loss.  There is no replacement for meat.  It is the most effective, more bang for your buck, and frankly the cheapest way to get protein.  Soy? Be gone!  Quinoa?  Have at you!  Lentils?  Fuck off!

Actually, a cup of lentils has more protein in it than a 4 oz. chicken breast and cost a dime for 19 lbs. of the stuff, but I maintain my position.  I’ve said it before and I shall say it again until you pay me, literally PAY ME (please pay me) to stop, but successful major weight-loss has more to do with your head than anything else.  You can’t go from having three bacon, double cheese, triple patty cheeseburgers with French fries a week to having a cup of lentils and some steamed broccoli.  That is how riots start.

"I just want some tacos!"

It’s not enough to eat right, you have to change your eating habits so you enjoy eating right.  This doesn’t mean replacing your burger with some malformed vegetable puree that will only leave you hungrier for the real thing, it means understanding what you put into your body and what it is giving you.  To make such a drastic change is only going to leave you open for extreme failure, and part of what I am trying to do is help you avoid those detrimental pitfalls.

So here is the list of the protein that worked the best for me in getting my daily requirements, filling me up, and didn’t completely destroy my pocketbook.

Chicken is THE protein in my opinion.  It was practically the only protein I ate in all of my weight-loss escapades.  A chicken breast is not only loaded with about 25 grams of protein, it is also relatively low in fat, extremely filling and it’s so cheap they might as well be giving it away.  It’s also completely versatile and lends itself to any culinary genre with minimal effort.  It cooks fast and goes well with anything; rice, pasta, salad, fruit, and vegetables (how is that different from salad? Stop asking questions).  It is even good by itself.  Seriously, stick a chicken breast on a stick and put it over a fire and you won’t be asking, “But where’s the butter?” 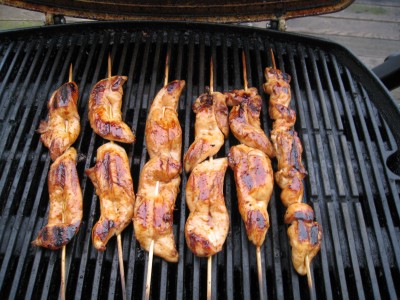 I was hoping to find a funny picture of a cartoon chicken over a fire with a stick up its butt, but all I found were kabobs.

On the downside, chicken needs to be prepared as it is mostly tasteless.  When people say, “Everything tastes like chicken”, well that’s because chicken doesn’t taste like anything.  You can’t steam some chicken thinking the flavor is going to astound you because all you’re going to get is a hot, steaming, juicy clump of “that cheap newspaper insert has more taste than this.”  But this isn’t such a bad thing as learning how to cook is also one of the most helpful things with losing weight (but that is for a much, much later post).

I’m sorry, but you’re going to have to put that salmon down.  And that shark.  And the lobster, shrimp and crab.  Those are all great fish, and contain wonderful omega-3 fats, but they also contain a whole lot of them.  The reason a lot of people love these fish is because of their meaty texture and buttery flavor, but if you use the word “butter” to describe a food, odds are it might not be the best for diets.  No, the fish I am talking about are the whitefish (trout, tilapia, mahi mahi, flounder, etc.).  These have a lot of protein and are filled with a lot of great stuff other meats don’t have, and are low in fat.  They cook in a snap, have tons of flavor without having to prepare them extensively, and can help with that “trapped on a deserted island” fantasy you have been having since the premiere of “Lost”.

"You know what would go great with this fish? Confusion and time travel."

The downsides are two: fish isn’t that filling.  Fish is light and flakey, and will often leave the dieter wanting not just one more piece, but like, 437 more pieces.

It’s mostly the price, though.  You can’t always find the right kinds of frozen fish at the market, and to buy fresh means you’re going to pay a pretty penny.  And when you get home, you’re going to have to cook that fish right away because a fish’s shelf life is very very small.  You wouldn’t think that it would matter, but how long a food will last in the fridge is going to become a very big part of your culinary decisions while losing weight.

Eggs are a miracle food: a tiny oval containing pure protein with a little yellow orb of the perfect sauce inside.  They are extremely cheap and are easy to cook and can be prepared in a variety of ways to help keep you from getting bored with your food.  From scrambled egg whites for breakfast, to hard-boiled eggs for lunch/snack, to a lovely green pepper and feta cheese omelet for dinner, eggs can be eaten for any meal of the day.  Two hard boiled eggs contain as much protein as a chicken breast, and are a lot more fun to eat.

The downside?  Shit, I have been eating eggs for years and I find myself hard-pressed to see a downside to eggs.  If forced to (at gun point) I would say that unless you only eat hard boiled eggs, it’s going to be hard to transport them.  There is just something about reheated scrambled eggs that isn’t quite the same.  I don’t put any credence in “eggs raise your cholesterol” argument because the authorities have been going back and forth on the matter for decades.  Just make sure that in the end you are eating more of the white than the yolks (which can be saved to make custard for ‘Reward Days’). Otherwise, they are great.

Snack food is going to have its own post, but I will tell you that if you are on a diet, nuts are important to your hunger level.  Almonds and peanuts are jam packed with protein, are easy to portion out, have a looooooooooooooong shelf life, and taste superb.  Feeling peckish?  A handful of almonds will cure what ails ya.  About to slam your boss’s head through the window if you don’t get a donut soon?  Slam down a few peanuts, that’ll fix your murderous rage.  And this includes peanut and almond butter, things that are loaded with protein and will sate that “creamy” craving of yours.

The bad part?  Well, you saw me use the words “butter” and “cream”, so what do you think?  Nuts are loaded with fat.  So much, in fact, that nuts could almost be considered a fat.  A handful of almonds will help ease your cravings while providing nutrients, but anymore than a handful and you might as well be eating butter straight from the wax paper. 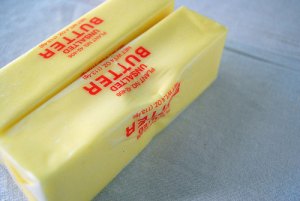 Or as I like to call it, "A Shamestick".

Hey, we live in an age of technology, why shouldn’t it have a representative in the food world?  Protein bars/powders have chemistry on their side, providing you with a massive amount of not just protein but also as many minerals as a multivitamin.  It requires no cooking or preparation, is easy to transport in a purse or bag, and can be saved for later without the fear of spoiling.  I ate at least one protein bar and used protein powder every day during my major dieting seasons.

The drawback is in the pocketbook.  I was lucky enough to have an employer who bought a ton of healthy snacks for the office at the time, but no matter how hard I searched I couldn’t find affordable bars/powders in the quantities that I wanted.  Sure, you could get a big tub of MUSCLESUSBTANCEDRINK for $50, but when it comes to the chemical stuff you want to pay extra close attention to the ingredient list.  Most of the time, those bars and powders are nothing but sugar which is the opposite of what we’re looking for here.

And that’s the protein I ate.  Sure, there’s beef, which if you get the right cut and consume with modesty can be an excellent source of protein, but I found it hard to battle my cravings when beef was around so I just cut it out.  Sorry, but pork and all of its incarnations will have to go.  I have tried tofu and other soy-based products and those only made me angry, so out they went.  It’s not that I don’t like it, but tofu isn’t really my thing and I have already said that replacing the food you love with imitation food just seems straight-up sad to me.  And I don’t do beans.  Ever.  Listen, we all have the one food we can’t do that everybody thinks we are crazing for hating.  With my father, it’s onions.  With a good friend of mine, it’s tomatoes and egg yolks.  Almost every person of color I know hates mayonnaise (something about reminding them of the White-Man).  With me, it’s beans.  I hear they are a great source of protein, you just won’t find me talking about them. 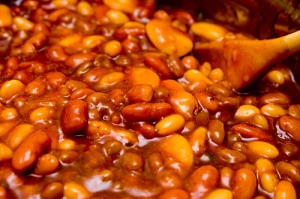