Phil and Rosco sit in a movie theater watching a film.  A couple sits behind them, loudly discussing the movie.

WOMAN:  I don’t understand.  Who is that?

WOMAN:  I thought the guy with the weird eye was the main character.

MAN:  What guy with the weird eye?

WOMAN:  The one that goes all over the place and is all googley.

WOMAN:  Then what is this?

WOMAN:  Then who is that?

WOMAN:  What is this movie about?

Rosco sighs heavily and turns around.

ROSCO: That there is Belinda, a plucky, hard-working young professional dog-groomer who’s trying to save up enough money to buy the family farm back.  But little does she know that her next door neighbor, Mr. Phillip Dwendaller, a retired accountant from Baton Rouge, has been squirreling away to buy the farm from underneath Belinda. He does not want to risk losing that farm to Belinda, so he begins an elaborate process of removing all the hair off of every dog in the entire town to bankrupt her.  But then in comes Arthur, an unbalanced yet well-meaning check-out clerk at the local foodmart that happens to be in love with Belinda, has gotten wise to Dwendaller’s plan, and is planning to kill him with an old piece of wood that was left to him by is deranged father.  This brings us to our current predicament, where Belinda has set up five appointments with the richest clients in town, Dwendaller is buying eight cans of Nair, and Arthur is oiling his wood stick.  That’s what the movie is about, that’s who’s in it and that’s where we are right now.  Now will you shut the fuck up?!

The woman slowly slides down into her chair and remains silent.  Rosco turns back around.  Phil leans over to him.

PHIL: (whispering)  What the hell was that?

ROSCO:  It says ‘FORREST GUMP’ in big fucking letters outside.  If she’s too stupid to read what she’s walking into, then she won’t know what’s going on anyway.  Besides, she won’t talk because she’ll be too focused on looking for the cute puppies. 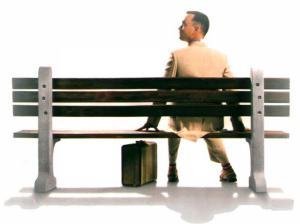 "It was a good movie, but where the hell were the dogs?!"