I’ve run out of 100% original recipes to share with you all.  My stomach can’t take any more “Cheap Food Made Good” for right now.  I have a couple of drinks that I could talk about, but my funds and time for “Research Liquor” (my favorite kind of liquor, really, as it conveys a sense of requirement and duty in the name of science and the betterment of mankind) have been extremely low as of late, and I have run out of things to say about alcohol for the time being.

I know, I'm as shocked as you.

Instead of regurgitating some Joy of Cooking recipe that I found online, or waxing poetic about the wonders of salt, I’ve decided to take a different approach to my food entries for awhile.  I’ve mentioned it before, but when I graduated from college in the spring of 2007 I was 5’6” tall and weighed 260 lbs.  In the time since then, I have lost 80 lbs. and have grown an inch and a half (I started wearing boots).  So during this time of culinary blank-mindedness I’m going to go over how I lost that weight and continue to keep it off, the steps I took to become a stronger and healthier person, and the details of lessons I’ve learned the hard way.  Of course I will try to make it entertaining for you readers of mine that are fit and thin and muscular and beautiful and always have been; for the other 98% who have to work their asses off to work their asses off, I hope I can at least help with your morale, if not anything else.

I feel silly that I started off with a kind of “Steps” motif in the title when I know I’m far too lazy to keep it up through the following entries.  But it’s not like I can go back and fix it now, right? 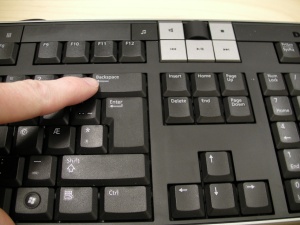 It’s slightly simplistic and overtly obvious to say, but yes, the beginning step of significant weight-loss is deciding to do it, to really do it, and that once you start you never look back.  But this is one of those things that are much easier said than done, especially if that decision is tied up with current feelings of inadequacy and shame.  All of us at one point or another have said, “I need to lose some weight.  I’m going to lose some weight,” only to turn around and eat a heaping bowl of refined sugar (or the equivalent thereof).  When I look back over my weight-loss journey, the decision process was the longest and hardest to do out of everything.

How long did it take me?  Honestly, five years.  From the summer before my senior year in high school to a year after I graduated, I flip-flopped from wanting to not feel ashamed of myself to feeling too ashamed to believe I deserved what I wanted.  Depending on how long that Fat-Voice Demon has been bouncing around your skull, this step may take very long indeed.  For me, I had gone most of my life feeling somewhat worthless because of my size.  In retrospect, I didn’t start to become truly fat until I was in high school, but when you’re a kid the teasing from the kids at school, the images you see from the media and any comments made from your family about your size stick in your brain.  To a young teen playing running around the house with his shirt off pretending he’s in the jungle and feeling great about life, the observation, “You’re too fat to be walking around without a shirt,” is crushing.  These experiences pile up, and once you get to the age where you and only you are fully responsible for your life, you’ll end up judging yourself without even knowing you’re doing so.

This kind of fucked up can not be “decided” away overnight.  It takes time.  In fact, to truly lose weight and keep it off, you must be in it for the long haul.  What I’m talking about doesn’t take a few weeks, or even a few months.  We’re not talking about five, ten, twenty pounds; we’re talking fifty to hundred, at least.  This isn’t simply eating right and exercising.  Those are the easy parts.  I am talking about habits and behavior, two things that take lifetimes to construct and that will defend themselves from changing like a caged tiger.  The people who try to fight these things in a matter of a month or so are doomed for failure.  You really want to lose weight?  Then ante up and prepare your wits because you’re in the big leagues now and you’ll need to use everything you’ve got.

That sounds a lot more dramatic than I mean it to be, but you do have to be ready.  You’re going to climb one big motherfucking mountain.  Or think of it like attending higher education, except with this I can guarantee you that your life will be better, richer and fuller by the end, a promise that a college degree has not been able to fulfill for a long time.

Hello degree in English/Sociology/Business/Theatre, you useless piece of crap.

Still, the hardest part is the first one because it’s about mindset, and the mind is a fucked up place.  But the battle with weight (or in general, health) is mostly about the mind.  One your have you head in the right place the physical stuff will seem like a walk in the park.

So get ready for the next 999 steps, knowing that I’m going to be right here beside you, step after step, with my condescending voice using vulgar language to tell stupid jokes, playing my cheap guitar while I sing Disney tunes, and an occasional fart.  But at least you won’t be alone.  On this journey, you’re never alone.

Although looking at that 2007 picture, you may not want me around all the time anyway.