This is going to be my last recipe for awhile.  Food costs money and since I don’t really have any of that right now, all of these recipes (even the cheap ones) are hurting my pocketbook.  It’s also taking a toll on my waistline.  Looking back over the recipes I’ve had Mac n’ Cheese, Hot Dogs and Top Ramen, and with the ravioli that I’m doing today I have developed quite a bit of a pudge in my lower torso.  Also, I’m running out of ideas.

Now this one was a tad hard for me because Chef Boyardee Ravioli holds a special place in my heart.  For years, a guilty pleasure of mine has been to eat this stuff cold and straight from a can.  I usually have to be alone when I do this because when people see it they feel sick.  Even just talking about it makes some people heave.  I know you are because I can hear you through the internet.

Just like the Six-Million Dollar Man, I have the technology.

But try I must, so I put myself to the task on making this better and after a few weeks of failures I decided to just do the one thing that makes everything better: Fry it! 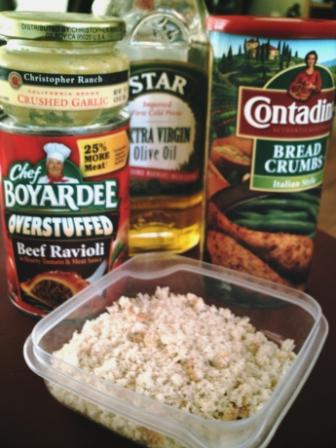 The special ingredient for this dish will be bread crumbs in the style of your choosing.  I opted for the cheapest I could find, which were Italian bread crumbs.  You could also take some old bread you have lying around the house and break it into crumbs with your bare hands or, if you don’t have that kind of time, with a food processor.  If you don’t have that either, then I don’t know what to do with you.  Trying knitting, I heard that’s fulfilling.  For this recipe, I tried both store bought and homemade.

Start by opening the can and dumping everything into a bowl.  Carefully take out each ravioli, scrap off the sauce and place into another bowl.  If you’re frying, heat some oil in a skillet, and then in another bowl beat one egg.  If your baking, preheat your oven to around 400.  While you’re waiting for things to heat up, pour your breadcrumbs into yet another bowl, and if you’re baking, pour in a little olive oil and toss the crumbs around a bit.  All in the bowl.

I only have bowls in my kitchen. No plates, cups or spoons. Just bowls.

Once everything is ready, place the ravioli into the crumbs and dredge.  If you’re frying, put the ravioli in the beaten egg first.  Once the ravioli is thoroughly coated, place into the oil/onto a cookie sheet.  It won’t take that long to fry, so keep an eye out and once the ravioli are nice and brown go ahead and take them out.  With baking it will take about five minutes, at which point you might want to move them to the broiler just to crisp the tops a bit.  Once they’re done, wait until they are cool to the touch and then plate (or bowl).

Just because I really suck at frying (by the end they looked like I had buried them by the ocean for a couple of days), I liked the baked ravioli more.  I also preferred the larger bread crumbs that I had made over the store bought, but they both still worked.  What I also liked about the baked ones was that you could sprinkle on some parmesan cheese before putting it into the broiler.  And while the ravioli is cooking, you could take the left over sauce from the can, add some garlic, olive oil, black pepper and red pepper flakes, heat it up in the microwave for 30 seconds and then use it as a dipping sauce.

Strangely enough, all the Chef Boyardee products were the same price.  Even the “over-stuffed” ravioli, which is what I used, were the exact same price as the normal ones.  I wish all of life worked like this; if it did I would be sleeping on a King-sized mattress.  It was about $1.40 for the Boyardee, and then another $1.80 for the bread crumbs.  This is great finger food for a party or some kids.  Enjoy!