Ahhh, the good ole’ American hot dog.  Its exact origins unknown, it is labeled simply as “Meat” while we grill, boil, or microwave these suckers into cheap tubes of instant gratification.  But the normal hot dog is also bland yet salty, with no culinary depth whatsoever.  Sure, you could pile up some onions, make some chili, or cover it with cheese, but that doesn’t change the fact that the normal hot dog itself is nothing of worth and shall always remain thus.  But I say, “NAY!” to such disparities, for our patriotic meat tubes deserve more than to be drowned in $5 chili and yellow mustard.  Behold!  The Roasted Pepper Stuffed Hot Dog! 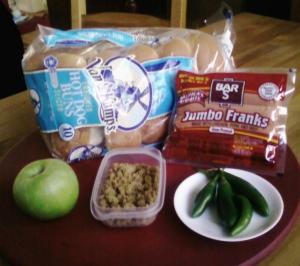 Now this dish calls for some hot dogs, some buns, and two Serrano chili peppers per dog.  Is this dish going to be spicy?  Can I get an AMEN?  Of course it’s going to be spicy!  If you’re one of these people who are scared of spicy food, or if you don’t like spicy food in general, then you, sir (or ma’am), are a no friend of mine!  A coward, a sissy, a scaredy-cat!  And if you’re one of those people who can’t eat spicy food because of some intestinal or heart condition, then . . . then . . . well, I don’t have an insult for you.  But man the fuck up anyway (after consulting with your doctor)!

Out of all my recipes so far this is by far the easiest.  1 – Roast Peppers (aka, stick under broiler until charred on each side). 2 – Cut hot dogs only half way through length wise, and then with a small spoon gently scoop out a little meat from either side of the dog.  3 – Once the peppers are roasted, stuff into dogs.  4 – Cook on a George Foreman Grill, the mightiest kitchen appliance for the unemployed who may or may not have enough money to pay the gas bill.  5 – Toast the buns if you can, otherwise spread some mustard on and eat!  The roasting will take some bite out of the peppers, but the dog is still going to pack a wallop!  If you wanted to get fancy you could also stuff the dogs with some roasted garlic as well, and maybe squeeze some lime over it.  Enjoy!
. . .
. . .
. . .
. . .
. . .
Oh God, are you still here?  What?  You really don’t like spicy food?  Sigh.  Fine.  If spitting fire and being awesome is “too much for your senses,” here’s another way to go.  Instead of roasting peppers, take a ¼ of a small apple.  In this case I used a Granny Smith, but any apple will do.  Dice the apple up and then stuff that in the hot dog before you cook it.  If you wanted to go a little further, mix the diced apple with brown sugar, cinnamon and black pepper before stuffing, and then opt the mustard out for a dab of barbeque sauce.  The dog will be sweet and savory at the same time, as the brown sugar will caramelize on the grill.  If you don’t have a George Forman Grill, your broiler/oven will work.  If you don’t have that, then you can use an actual fire, I’ve heard fire works pretty well for cooking food.  Just don’t use a microwave.

Are there multiple applications for this?  You bet!  Sun-dried tomatoes and basil, grapes and fennel, oranges and dill, the list goes on.  But each of those items will up the price, and part of these recipes is to keep the budget small.  Speaking of which, this entire endeavor barely cost me $5.  The cheapo hot dogs were $1.50, the chiles cost about 12¢, the apple about 40¢, and I got some discount buns for 79¢.  Cheap but delightful!  But be warned!  The low cost of the dish is counteracted by how delicious they are and how fast they are eaten.  Still, not a bad way to spend $3. 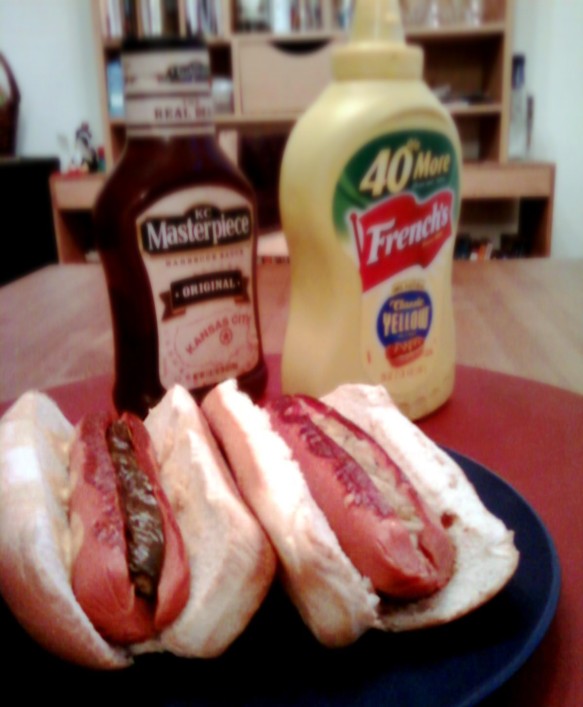