I'm trying to get a new camera, okay?

It’s not that I’m cheap (which I surely am), it’s that I prefer to save my money to buy certain things I enjoy and go without other amenities that may befit someone in this day and age.  For example: I will spend a pretty dollar on high quality food for my culinary adventures, but I will not throw away my black dress shoes that I found near a dumpster in 2001 and that has many holes in it for a new pair.  Or I will spend a lot of money on my drinking hobbies (dependencies? Who invited you, Freud?), but I won’t buy a new bed so that my feet aren’t current dangling off the mattress. It’s a give and take situation.  But with the current state of the economy we all must find ways to cut corners and food is usually one of the first places to cut from.   But you would be surprised at all the good food you can make with what you already have in your kitchen.  So in a series that I am calling EconoChef, I will take something that is cheap and unfulfilling and just by changing/adding an ingredient or two will change that 98¢ bargain bin rice cake into a meal that will have your friends offering to pay you money to cook for them.  If that does happen, I would ask you give me a cut.  I’m trying to start a racket here. 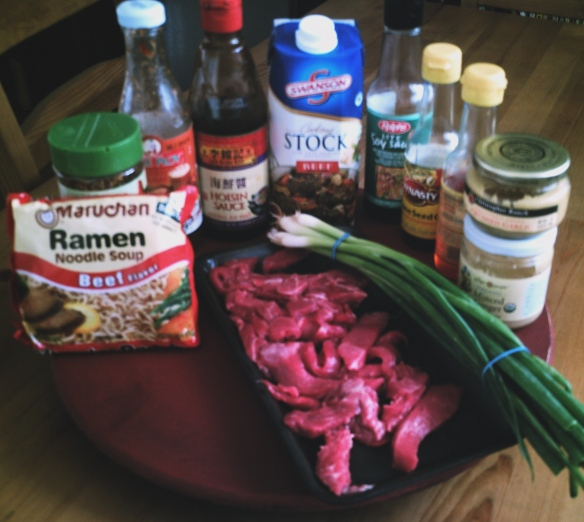 The only thing in the picture that matter are the Ramen and the Beef Stock. Everything else I already had.

After a summer where I ate nothing else (seriously, breakfast, lunch, dinner) I could not even smell Top Ramen and keep from gagging.  And after revisiting it so many years later, I can still understand why.  It is a thin, measly meal, one that offers no nutrition and will fill up your stomach but never really satisfy you.  This is because they have taken out half of the equation that can make authentic ramen so yummy: the broth.  Instead of a broth that has been cared for and cooked for hours, we get this: 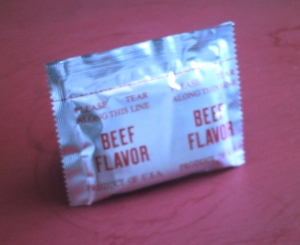 BEGONE, FOUL DEMON!  Instead, go out and get yourself some chicken, beef, or vegetable broth and use that instead.  You could also use stock instead (broth is made from boiling meat and is clear and clean, stock is made from boiling bones and it is hearty and rich).  Suddenly you will have the beginnings of a culinary delight!  I say beginnings because now you have to go and make your broth/stock taste good.  This leads me to the first hint at cooking on a budget: Spend all your of money on condiments, and know what they all taste like.  Make sure you’re up to your elbows with herbs and spices, keep all the shelves on your fridge door stocked with goodies from all over the store.  Study and see how each of them is used and what tastes they bring to the party.  In this case salt and pepper can work, of course, but so can soy sauce, hoison sauce, chili sauce, sesame seed oil, chili oil, wasabi, red pepper flakes, etc.  Crushed garlic and ginger always do the trick in Asian dishes, and they come pre-crushed in jars if you want to save yourself the time.  Hell, you could even use the packet that you took out of the Tap Ramen package, just don’t use too much as the broth/stock is already salty.  Instead of ending up with saltsoup, you’ll have a broth that is deep, rich and enjoyable.  And cook your noodles in the broth, too, goddammit!  We’re banging on all cylinders over here, get with the program.

And it doesn’t have to stop there!  After it’s all finished, additions like corn, eggs, seaweed (if you already got it) and actual meat will put the dish over the top.  I used thin (and cheap) beef strips cut for stir-fries, and some cut up green onions as a garnish.  I also used a more expensive beef broth to start with, but there are some that cost less than a dollar. Not counting the meat and my hoity-toity food preferences, the meal would cost me less than $3.  With three dollars, you don’t have shitty, pre-packaged Top Ramen anymore, you have a meal that will fool your friends and yourself. 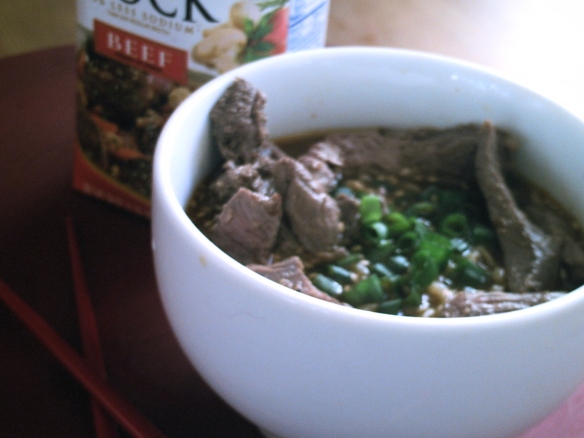