It’s hard enough just getting by in this world, let alone trying to do something.  But when someone comes along and starts spouting condescending, parental-sounding bullshit advice then you suddenly have to deal with murderous rage alongside everything else.  Please forgive the general truism, but if you are to succeed in any venture a definite structure must be set into place.  God, I feel dirty, excuse me while I take a shower.

Unfortunately, it’s true (truism . . . true . . . oh, I get it).  We had no solid structure to how we went about producing.  Oh, I tried to keep a calendar and notes of when we talked, but these were feeble attempts when a key element in the structure was missing: Hierarchy.  In AirSWAT, each of us held the same amount of power as the others in every aspect of the project.  This was fine in general as AirSWAT wouldn’t have existed if we each hadn’t been involved, but in regards to each particular production it was a detriment.  Going from my POV for a moment (unlike the rest of the article which should be considered straight from the mouth of THE LORD), working endlessly on the script from conception to realization only to have one of the others argue against a crucial plot point during production was more than just aggravating but truly upsetting.  And I’m sure that this happened vice versa as I would argue/comment about an area that I did not have experience in, such as the actual filming process.  Undermining each other is a natural part of this set up.

If for every production we had said, “Okay, Nic and Pete, you write.  Matt, handle direction and filming.  Mark, just . . . just . . . just act, man.  You’re good at that,” then a hierarchy would have been set.  We could have written, directed and produced without getting in each other’s way, thereby forgoing many of the issues that we ended up having with each other.

But there’s more to it than the practical.  Now here comes another truism, but this one doesn’t make me feel like some corporate stooge so I won’t need to take another shower. 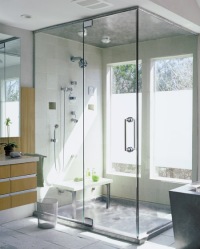 This time, I want to do it.

Here is another PSA, the only one we didn’t film in a garage with a parachute as a back drop.  To his credit this was one of Mark’s ideas, and it was the last PSA that we filmed that actually could have a genuine message to it.

Ladies, honestly, we love you. Keep yourselves safe. Also, BOOBIES!